(1) Recurring results: a) In 2018, the figure does not include the €15.4 million impact recorded in Other Operating Income corresponding to the conclusion of the lawsuit against Mivisa Envases S.A. €5.5 million of negative goodwill recorded with the acquisition of the Globus companies, net of €1.8 million recorded in Other operating expenses related to consultancies and lawyers for said litigation and the acquisition of companies. b) In 2017, it does not include the positive impact of €4.5 million corresponding to the net impact of the collection of the compensation for the fire in Germany once the non-recurring expenses of inventories, clearing and cleaning were deducted; and the management expenses associated with the purchase of Supralon companies in Europe, among others.
(2) Like-for-like: Like-for-like growth excludes the impact of the variation in exchange rates, the effect of the change in the consolidation scope and the non-recurring gains of the business.

The breakdown and geographical performance of revenue in 2018 is as follows:

1. Like-for-like: Like-for-like growth excludes the impact of the variation in exchange rates, the effect of the change in the consolidation scope and the non-recurring gains of the business.
2. Income by origin of sale.

Other operating income through to December came to €21.0 million, including €8.5 million received in January 2018 as compensation for patent infringement and a further €6.9 million in June 2018 resulting from the agreement reached with Crown Food España S.A.U. to end the legal actions.

The increased prices of production inputs are from commercial activity aimed at adapting sales prices, especially in the second half of the year. The gross margin accumulated in the year stands at 71.1% (-1.8 p.p. vs. 2017).

Personnel expenses in 2018 grew by 2.6 % vs. 2017 to €189.1 million with the average workforce increasing by 1.9% to 4,641 (excluding the incorporation of 98 people in December of this year after the acquisition of Globus in Australia and New Zealand). The increase in hired staff, especially in Spain (+ 7.0% on the previous year) is associated with the start-up of the new plant.

The "Other operating expenses" have been kept under control and are down 0.4% on 2017 to €189.2 million, despite the fact that the expenses for energy supply increased by 5.1% compared to the previous year. These savings are due, in part, to the good maintenance of the plants and the productive efficiencies obtained.

With the performance of other operating expenses, it should be noted that savings have been obtained despite the inclusion of higher plant expenses and other expenses associated with the start-up of a new module for the production of state-of-the-art cellulose in the Cáseda (Spain) plant.

Profit from the business combination

Subsequent to the acquisition of the Globus companies in Australia and New Zealand, according to accounting standards on business combinations, independent experts must assign a purchase price to the net fair value of the acquired assets and liabilities.

The share of the Viscofan companies in the net fair value of the identifiable assets, liabilities and contingent liabilities exceeds the cost of the business combination. This difference was recognised in the profit for the year once the acquisition cost and the valuation of the net assets acquired had been reevaluated, generating a gain of €5.5 million in the consolidated financial statements of the Viscofan Group as a result of the higher appraisals by independent experts of the tangible and intangible assets of the group of companies acquired.

Like-for-like1 EBITDA in 2018 is down by -1.3% vs. 2017 due to the increased costs with raw materials and energy, amid higher fixed and personnel expenses mostly associated with the commissioning of the new plant in Spain.

In reported terms, accumulated EBITDA stood at €208.8 million, -1.2% less than in 2017. The unfavourable performance of exchange rates negatively affected EBITDA reported for 2018 by more than €14.2 million or 6.9 p.p. However, the impact of exchange rates was offset by the profit obtained from compensation for patent infringement and the allocation of the purchase price of Globus assets, which have also generated a non-recurring accounting profit in the year.

Cumulative depreciation and amortisation costs in the year to date have risen by 10.7% vs. 2017 to €62.4 million, reflecting the investments made in the course of the MORE TO BE strategic plan, which has led to growth in assets and the improvement of the industrial park, with the new production plant in Cáseda being noteworthy. 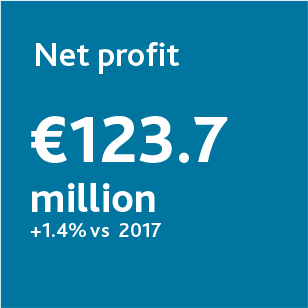 A comparison of the information on non-recurring business impacts during 2018 and 2017 follows, which contributed €19.1 million and €4.5 million respectively in operating profits.

In 2018 a gain of €5.5 million was reported corresponding to the negative goodwill from the lower cost of business combination over the corresponding value of the identifiable assets acquired less that of the liabilities assumed from the acquisition of the Globus companies in Australia and New Zealand.

In 2018, €15.4 million in Other Operating Income corresponding to the conclusion of the lawsuit against Mivisa Envases S.A.

The expenses of non-recurring third parties, including advisors and lawyers related to the law suit against Mivisa Envases S.A. and the acquisition of companies amount to €1.8 million.

In 2017, a positive impact of €4.5 million was recorded in EBITDA from the net impact of compensation for the fire in Germany following the deduction of, inter alia, non-recurring stock, clearance and cleaning costs and the management costs associated with the acquisition of the Supralon companies in Europe, among others.

Cumulative profit before tax through to December 2018 amounted to €147.3 million, with corporate income tax totalling €23.6 million at an effective tax rate of 16.0% (16.1% in the same period in the previous year).

The difference between the theoretical tax rate (28%) and the effective tax rate (16.0%) basically corresponds to the difference between the different tax rates for non-resident subsidiaries in Navarre (tax address for Viscofan S.A.) that pay taxes in each of the countries they operate in, applying the prevailing corporate income tax rate (or equivalent tax) for the period and the consideration of tax deductions for investments in some Group companies.

Finally, the Net profit accumulated to December is €123.7 million, 1.4% higher than the same period of the previous year.

€71.6 million was invested over the year compared to €107.2 million in 2017, with the most significant investment of both years being the construction of the Cáseda (Spain) plant and the installation of new technology for the production of viscose-based casings (cellulose and fibrous).

Production began in 2018 and new machinery was installed to increase the volume of production under this technology, with the aim of obtaining productive savings in 2019 and 2020. It should be noted that the meters produced using the new technology have shown greater levels of efficiency and productive speed, and a high degree of customer satisfaction.

In 2018 new edible collagen capacity was also installed and started up in Serbia.

Following the large investment effort made in the first phase (2016-2018) of the MORE TO BE strategic plan, the last years of this period (2019-2020) are characterised by a lower investment requirement in absolute terms, although in 2019, investment in additional machinery needed to complete the new technology project in Caseda is planned, and capacity increase projects remain in line with the expected growth needs in the market and with process improvements and energy optimisation. 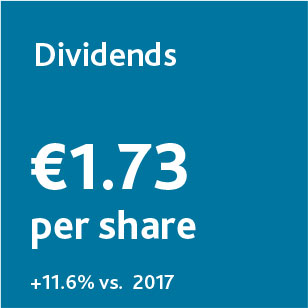 The Board of Directors of the Viscofan Group has agreed to propose to the General Shareholders' Meeting the distribution of a final dividend of €0.95 per share, with an amount of €44.2 million to be paid out on 6 June 2019.

This means total shareholder remuneration amounts to €1.73 per share, consisting of:

The remuneration proposed is 11.6% higher than the total remuneration of €1.55 per share approved last year, implying a distribution of €80.5 million.

The increase in shareholder remuneration, the stepping-up of the pace of investment projects, and the acquisition of Transform Pack Inc. and Globus companies in Australia and New Zealand were largely financed by cash flows from transactions, leaving Net bank debt in December 2018 at €79.6 million compared with €41.1 million at the end of December 2017.

Based on estimated growth, the Group plans to invest to strengthen its leadership position in the casings market and to continue improving the service it provides, as well as to upgrade its existing industrial equipment and operations. This forecast includes commitments such as capacity expansions, technological updates, optimisations of processes and environmental investments in safety and health. Thus, at year-end 2018, investment commitments totalled €4.9 million (€7.0 million at 2017 year-end).

At 31 December 2018, the Group has constructions and other items contracted under finance leases, the minimum payments and current value of which amount to €0.1 million (€0.2 million at 2017 year-end).

The Group also has various premises and other items of property, plant and equipment under lease arrangements. At 31 December 2018, the amount of the assets for right of use amounts to €19.6 million.

Your inquiry has been sent!

You will receive our response at the email address you have provided.

We use our own and third-party cookies to improve our services and show you advertising related to your preferences by analyzing your browsing habits. If you go on surfing, we will consider you accepting its use. You can get more information, or know how to change the configuration in our Cookies Policy. Accept